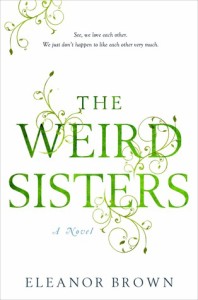 To be honest, I borrowed The Weird Sisters by Eleanor Brown audiobook from my library because the premise sounded interesting and, at about 10 hours, it fit my length requirements. I was pleasantly surprised by this gem of a story. This novel is just smart. Smart, clever, and compelling.

The novel revolves around the three Andreas sisters, born to a father who is a renowned Shakespeare professor. Accordingly, he names each of his daughters after characters from the Bard’s plays: Cordelia (King Lear), Rose (Rosalind, As You Like It), and Bean (Bianca, Taming of The Shrew). He also speaks mostly on verse. When news of their mother’s breast cancer hit, the sisters rush home to help care for her. Except each sister did not expect to find the others home as well.

While their excuse is to help their mother, each sister has returned to their small hometown because, in their own way, have failed miserably. They have nowhere else to go. Cordy, Rose, and Bean were never close, like most sisters seem to be. Coming back in their childhood home brings back the jealousy, hurt, and competition among the three. Eventually, each sister must own up to their failures and secrets in order to make amends and start anew.

As expected, there were many Shakespearean references and quotes in the novel. I have slightly more than passing knowledge of Will’s plays, but was able to catch many of the references. There’s enough context surrounding each quote, reference or Professor Andreas’ verse-speak that I had no problem understanding it. For those not familiar with Shakespeare, his words can sound like a foreign language. I suppose this is the advantage of listening to the audiobook. That is a testament to Kirsten Potter whose narration brings the characters to life.

It took me about halfway through the novel to grasp the idea of the “communal” narrator of the novel. Instead of first person voice, the novel is told through the collective voice of all three sisters. Once I realized this, it was easy to follow the story’s flow.

Sibling rivalry and dealing with family expectations are core themes throughout the book. With the help of many jumps into their past memories, we learn how their childhoods shaped each girl  as the adult they’ve become. Cordy, Rose, and Bean needed travel home to understand that they are not their Shakespearean namesake, but their own person with their own lives.

I highly recommend The Weird Sisters by Eleanor Brown on audiobook or print.