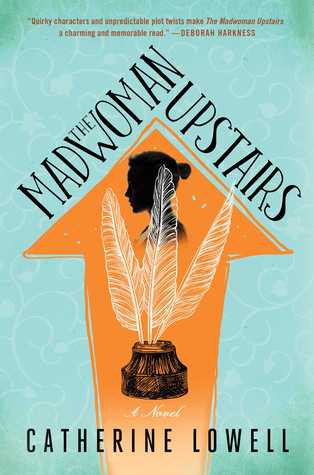 The Madwoman Upstairs by Catherine Lowell knocks it out of the ballpark.  The debut novel hit all my sweet spots: old books, history of said books, Oxford, and deep, dark secrets. The old books in question are four books from the Brontë sisters: Jane Eyre, Wuthering Heights, Agnes Grey, and The Tenant of Wildfell Hall.

Before I continue my review, I have a confession. I’ve never read any of the Brontë sisters’ books. Not even Jane Eyre or Wuthering Heights. I think I tried back in high school, but they didn’t appeal to me.

Our heroine Emily Whipple is the last living descendant of the Brontë family. She is also lost.  Figuratively, that is. Her eccentric father, who died when she was 15, shaped all of her experiences. He raised alone and homeschooled her in an unorthodox manner–which included immersing her into the Brontës’ books.

The novel opens with Emily starting first time at Oxford’s Old College. At twenty years old, she is a late bloomer compared to other first years. Oddly, she is given an old tower on campus as her residence. Emily attempts to escape her father’s ghosts and hides from the public–who believes she is the heir to a trove of Brontë  diaries, paintings, letters and early drafts.

Mysteriously, old books from Emily’s past begin appearing in her room. The books were her father’s personal copies of the Brontës’ novels. Each book is heavily highlighted and filled with her father’s mostly illegible notes. She’s convince that her father is sending messages and throws herself into a literary scavenger hunt. She soon learns more about herself and her father’s past than she ever expected.

This novel is funny. I know my synopsis sounds serious, but Emily made me laugh out loud. She’s a smartass and doesn’t like authority figures. My type of woman! The way she describes things around her is unusual, but as soon as I read it, the words fit perfectly. For example, this description of fish and chips:

The waiter named Hugh returned and dumped two plates in front of us. On each one was a fish that looked like it had died tragically by drowning in its own fat. The scent was something savage–salty and prehistoric, wrought from an age in which people still ate each other.

The Madwoman Upstairs is a fun read that is perfect for Brontë fans and newbies alike.

Are you a fan of the Brontë sisters?

This post contains affiliate links. I received a review copy of the book.