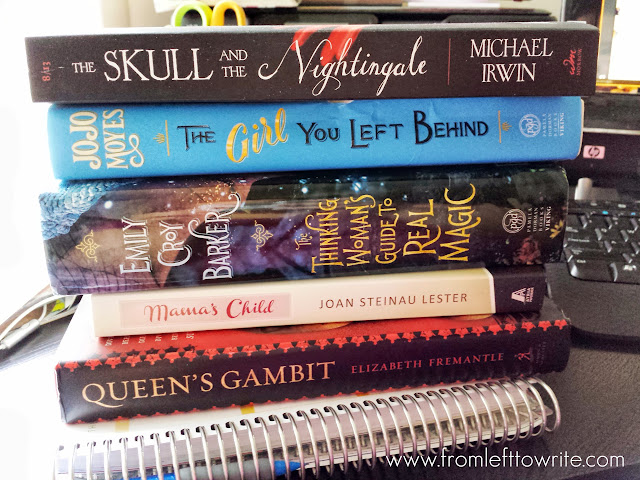 I’m totally behind on my reading after attending (and speaking!) at BlogHer a week ago. I don’t have any reviews to share right now, but I thought you might like a peek into my mail bag. Just as I sat down to write this, the UPS guy brought a couple of books. Of course I had to restack and retake the photo.

From top to bottom, I have:

The Skull and the Nightingale by Michael Irwin, ” chilling and deliciously dark, literary novel of manipulation and sex, intrigue and seduction, set in 18th-century England.”

The Girl You Left Behind by Jojo Moyes, “a spellbinding love story of two women separated by a century but united in their determination to fight for what they love most.”

The Thinking Woman’s Guide to Real Magic by Emily Croy Barker, “An imaginative story of a woman caught in an alternate world—where she will need to learn the skills of magic to survive.”

Mama’s Child by Joan Steinau Lester, “A stunning tale about the deeply entrenched conflicts between a white mother and her biracial daughter.”

Looking at this list, I realize that my interests in fiction are pretty varied. That’s a good thing!

I’m currently reading The Dinner by Herman Koch. I’ve heard great things about it, but I’ve only read through “Appetizers” and not sure how I feel yet. I’m waiting for it to pick up soon.

Which books from my mail bag should I read next? Which ones are you interested in?